I SODI DI S. NICCOLO’ 2018 WILL BE DISTRIBUTED BY LA PLACE DE BORDEAUX

Castellare di Castellina is pleased to announce that I Sodi di S. Niccolò 2018, its historic Supertuscan blend of Sangioveto and Malvasia Nera, has been released today, on the 29th of March, by La Place de Bordeaux, the prestigious trade network which distributes the most renowned fine wines in the world.

With the support of Timothée Moreau of the Bureau des Grands Vins, a network of Bordeaux negociants has been selected to distribute Castellare di Castellina Grand Cru through their channels in the markets of South America, Asia (except for South Korea), Africa, the Middle East, Oceania, and France. Therefore, in all continents except for the rest of Europe, North and Central America and the Caribbean Islands. 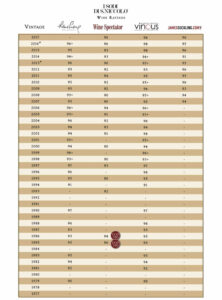 “We are proud to be part of this prestigious network”, says Paolo Panerai, founder of Castellare di Castellina, a historic Chianti Classico winery. “La Place de Bordeaux is the most important reference point for the fine wine market because it distributes authentic icons of the global enology. I Sodi di S. Niccolò 2018 is one of the first Italian Supertuscans (first vintage in 1977) made exclusively with indigenous Chianti Classico vines from the two best Crus of Castellare. A wine that in 40 harvests has collected many prestigious awards, starting from 1988 when it ranked sixth in the first Wine Spectator Top 100 list with the 1985 vintage, and again the following year with the 1986 vintage. With the 2017 vintage, I Sodi di S. Niccolò has celebrated its 40 vintages with a special label and a limited edition auctioned by Christie’s on December 2nd at the record price of 4,655 pounds (5,476 euros) for the 15-liter size accompanied by an art book press printed that collects the 40 birds drawn by the ornithologist / artist John Gould (1804-1881) appeared over the years on I Sodi di S. Niccolò labels”.

This new collaboration increases the prestige of this much sought-after wine, appreciated by national and international critics but above all by wine lovers. In particular the 2018 vintage stands out for its great olfactory intensity and a dense and elegant texture of sweet tannins, supported by the acidity of Sangioveto. “This vintage is particularly pleasant and crunchy – underlines the oenologist and Deputy Chairman Alessandro Cellai – with a long and persistent finish. It’s a wine ready to drink but also suitable for a very long aging”.

I Sodi di S. Niccolò 2018 – Toscana IGT
The name of the wine comes from the word used by Tuscan peasants to describe those lands that must be worked by hand, being too hard (in Italian sodi) or too steep to allow the use of oxen. San Niccolò is the name of the 14th century church that rises on the property of Castellare around which the vineyards are located. On the label, the iconic bird, always present on Castellare red wines, symbol of the daily commitment to sustainable viticulture that the winery has been carrying out for over 40 years.

The vintage 2018
The 2018 season began with an early bud break due to higher than average temperatures in March and April, followed by a fairly rainy May. In general, the spring in Chianti Classico was characterized by temperatures 3-4 ° lower than the average for the period, while the summer was quite normal. A wonderful September, with a succession of sunny days and a significant temperature range between day and night, then allowed to reach a perfect phenolic and aromatic ripening of the grapes.

The winemaking process
The manual harvest of the grapes took place in the first week of October and the bunches, placed in small boxes to avoid crushing, were immediately placed on the selection table for the sorting and subsequent destemming of the berries. Alcoholic fermentation took place in steel tanks, separately for the two varieties, at around 25 ° C for 7 days. Following, about 20 days of maceration on the skins and then malolactic fermentation. At the beginning of 2019 the wine was transferred in barriques (2/3 new and 1/3 used) for about 30 months. At the end of the ageing in wood, the blend was carried out and, after a short period in the tank, I Sodi di S. Niccolò 2018 was bottled where it rested 10 months before being released on the market.